The 30% Club: A Movement for Gender-Balanced Boards

“Companies with more women on boards outperform rivals with 66 percent higher return on capital and 53 percent higher return on equity,” she quotes from the Thirty Percent Club’s handbook, fished from her handbag. “But if Newton [which manages nearly $50 billion] only invested in companies that have 30 percent women on the board we would have nowhere to put our clients’ money.” 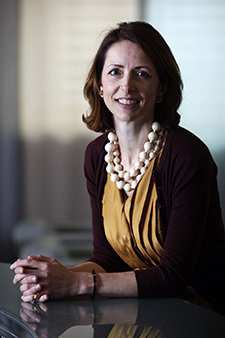 In 2010, 30% Club founder Helena Morrissey recognized a responsibility to help other women “because the FTSE 100 companies seem stuck at 10-15 percent of women at the highest levels” and decided to reach out directly to the board chairmen of the UK’s top businesses.

Brenda Trenowden is head of FIG Europe, ANZ Bank, and global chair, 30% Club. “Helena Morrissey understood that while women’s networks are very important, they were not actually moving women up. The only people who could do that were the people in power, and Helena’s idea was to start with the board: it’s at the top of the organization, it’s visible, and it gets measured.”

The goal in 2010 was to get a minimum of 30% women on the FTSE 100 by 2015. According to Trenowden, “a reasonable number and a reasonable timeframe.” She says, “Fifty-fifty is the ultimate goal, but we were starting from a baseline of 12.5% and we had twenty-one all-male FTSE 100 boards. We wanted to set an achievable target.”

Why 30%? Trenowden explains. “It’s been proven that in any under-represented group it’s very hard to be heard until you get to 30% and the group becomes normalized.”

For example, she says, “If I am the only woman in a group, whatever I say is identified as ‘the woman’s view’ or is somehow clouded in the fact that I’m a woman; that’s how what I say is interpreted. If there are two of us, they point to 'the women,' but don’t know our names. Once we get to 30% it starts being normalized and women can start to be heard for themselves.”

Karin Barnick is senior client partner with Korn Ferry in London, and a member of the 30% Club Steering Committee. Simply put, the theory of board diversity is this: “As you have more diverse representation on boards they are better performing, and as the executive management team sees this representation you see a cascade effect into the executive ranks. Through inclusive leadership, it will yield results, but it’s not a simple problem that anyone can fix overnight. ”

The 30% Club is a campaign of influence. Trenowden explains, “Our main activity is influencing the companies, with company chairs and CEOs signing up to lead the change. The second area of influence is public policy—we get involved in many government conversations around this issue, and we give input on the corporate governance code. The third area is influencing owners of companies. We have big investor groups comprised of asset owners and asset managers who are engaging with companies on this issue.

Club members lead by example. They actively support the business case for women holding 30% of board seats, and by joining, they signal their commitment to working collectively toward the 30% goal. Members support initiatives to improve the pipeline of women in leadership, recruit members and influence change, among other Board chairs and in their own firms.

By 2015 the 30% Club reached 26% female representation on FTSE 100 Boards and reduced from 21 to zero the number of all-male FTSE 100 boards. “We were delighted by that, and by the fact that businesses were doing it for business purposes without forcing anything, without legislating anything,” Trenowden says.

Sometimes mistaken for a women-led movement, the 30% Club is comprised of men and women solving a business problem together. Kiersten Barnet is deputy chief of staff to the chairman of Bloomberg LP, and she also serves as the Steering Committee chair of the US 30% Club. “I was in Hong Kong with Peter Grauer, chairman of Bloomberg and the U.S. 30% Club. Our agenda for the day included a reception for the launch of the 30% Club Hong Kong. I remember someone briefing us that this was a women’s initiative, then getting to the room, looking up, and thinking wait a minute—it’s all men in the room!”

From the original effort to lead UK Boards to voluntarily diversify their ranks, the 30% Club has expanded its efforts and its reach with new campaigns, new strategies, and chapters around the world. As chapters evolve they may engage in the growing range of 30% Club efforts, aligned with their progress and appropriate to their markets.

“When we got to 2015 there was a real sense that the progress wasn’t sustainable without also building the pipeline,” Trenowden says. “What you need for boards is women who have had an executive-level career, and if we’re not getting more women in executive roles, placing more women on boards is not going to be possible.” The 30% Club then deployed the same strategy toward executive ranks that was effectively driving up the number of women on boards. Barnick recalls, “We wrote to all the CEOs in the FTSE 350, urging them to commit to setting an aspirational target of 30% female representation in their senior leadership teams by 2020.” She emphasizes, “It’s a target, not a quota, and we were asking them for that target to be considered in the same way as any other business goal.” Dozens have signed on already and the movement is gaining traction.

ADDING TO THE MIX

The perceived scarcity of board-ready women is a top reason for the failure to elect women to boards, and some companies are taking that excuse head-on. “As our members started making progress in their own boardrooms, they thought about how they could be helping other board rooms make progress,” Barnet says. “So now, members are nominating women from their own organizations who should be sitting on boards of public companies already but aren’t, and putting them in the mix of qualified candidates, with the endorsement of her chair or CEO.”

The 30% Club now takes a “schoolroom to boardroom” approach to reach pre-work and early-career women. Barnick explains, “The 30% Club advocates action from ‘schoolroom to boardroom’ and goes to schools to encourage all students to believe that leadership potential in business is achievable, and amongst other things encourages girls to take STEM subjects.” Referencing a key finding from Korn Ferry’s "Women CEOs speak” study, Barnick says, “60% of the women CEOs surveyed had expertise in STEM, finance or business.” She adds, “There doesn’t have to be traditional girls’ subjects or traditional boys’ subjects. We’ve got to encourage girls to be bolder.” In addition, several chapters partner with business schools to provide scholarships for executive education to high potential young and mid-career women. Scholarships include professional development classes, certificate programs, full and partial funding for advanced degrees in business, and more.

A number of the 30% Club international chapters work with investor groups committed to gender parity, and willing to leverage their influence. Barnick explains, “Asset owners are being galvanized, and there is much greater active engagement by both asset owners and asset managers when it comes to gender diversity.” Trenowden describes what that engagement looks (and feels) like. “Six or seven members will sit across the table from the CEO and the chair, and ask them about their lack of diversity, ask what they are doing about it, ask about their succession planning, and ask them about their governance. And if shareholders are asking about that, you have to respond.” She adds, “We would never want to be labeled as “activist.” It is really a constructive discussion and most companies welcome the dialogue.”

Mentoring is credited with helping generations of men advance professionally, but it has been less available to women and people of color. In the 30% Club cross-company mentoring scheme, participating companies put forward male and female senior leaders to serve as mentors and high-potential women as mentees. Those individuals are carefully matched with someone from a different company, often a different industry. Mentees find it especially rewarding to have a mentor with whom she can speak openly, and mentors find they are gaining insights about what women may be experiencing in their own companies.

The 30% Club is a growing, global movement. The 30% Club has chapters in Australia, Canada, the GCC (Cooperation Council for the Arab States of the Gulf), Hong Kong, Ireland, Italy, Malaysia, Southern Africa, Turkey, the UK, and the USA.

Chapters take differing approaches, depending on when they started and their respective environments, but each chapter must meet certain criteria. “Chapters have to have a target and measure it regularly,” Trenowden says. “Their target should be 30%, but if they can’t quite get there because of their market, we understand that. Also, steering committee members have to be free of conflicts of interest. Those are the things we are prescriptive about.”

Not every group interested in starting a chapter is able to do so. “Unless you’ve really got enough core momentum initially, a core set of companies willing to get behind it and a reasonable government environment, it won’t work,” Trenowden says. It’s also important to have a free press. “The media is really important to the campaign.”

Trenowden adds, “The chapters have to decide how their market works and what’s right for them. The core mission is to try and influence change because it’s good for business.”

The 30% Club is not tied to hard and fast rules, preferring voluntary activity by member firms. In particular, participating companies are encouraged to do the hard work. Trenowden says, “They have got to be brave. They’ve got to look at the metrics and understand what they are challenged by. Is it recruitment? Is it the perception of their company in the market? Is it something in their training where they’ve got inherent bias?”

When we interview senior women and ask ‘how did you get to the top?’ A number of them say ‘I chose my company carefully.'

“One company I talked to found that women spent, on average, six years longer before promotion than men, and they were shocked! They didn’t see it until they did the work and looked at the data.”

Effective change starts with honest self-reflection. “The call to action for our members is to look at your board and your pipeline of women internally, and then identify those barriers that need to come down,” Barnet says. “They’re not the same for everyone, and we respect that. But how do you get creative around removing barriers so you can build the best-equipped board to meet the challenges in today’s market?”

There is no quick solution to a longstanding problem, but there is growing urgency around the issue of gender parity. “Many companies have been working on this for some time,” Barnick says. “I think there is a bandwagon that is rolling, and perhaps recent media coverage just helps renew the focus. How it all pans out, we have yet to see. It’s very easy saying this is what one wants to do. Making it happen is very different.”