The exponential growth of technology is transforming the way we live and work. How will automation change the executive roles of the future and what impact will that have on senior talent acquisition?

Ray Kurzweil, Google’s Chief Futurist, believes that we will have computers with the processing power of the human brain by 2025 and the processing power of the entire human race by 2050. Having predicted the fall of the Soviet Union, the astronomical rise of the internet and the day when a computer could beat a chess champion (as happened in 1997 when IBM’s Deep Blue computer triumphed over Gary Kasparov), Dr. Kurzweil is not to be ignored.

We now live in a world where selfdriving cars could soon be zipping around large cities, personal assistants could be automated through machine learning, drones can deliver items in minutes instead of days, and we trust algorithms to recommend the restaurants we eat in, the TV shows we watch, the books we read and the holidays we book.

So what do these changes mean for the future of work? Are we on the brink of widespread technology-led unemployment? Or are we approaching an unparalleled era of technology-enabled human productivity?

Where could machines replace us? 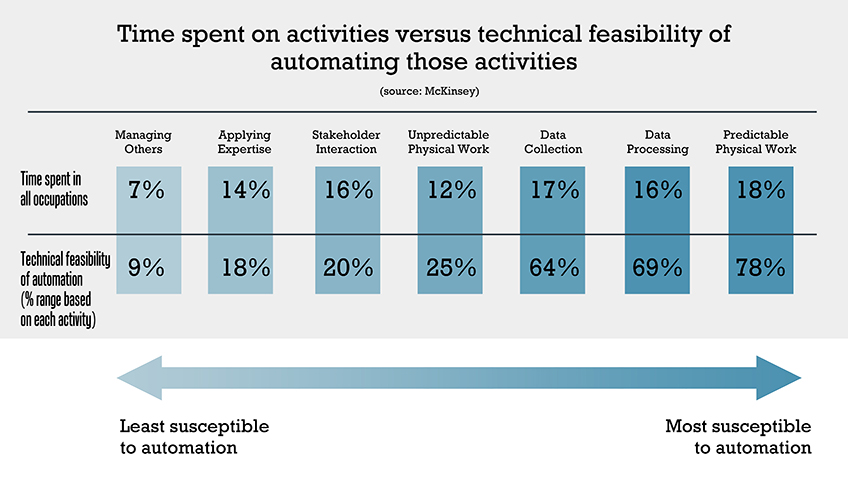 The McKinsey Global Institute recently explored these questions in its whitepaper ‘Where machines could replace humans – and where they can’t (yet)’. The central thesis is that very few, if any, entire occupations will be entirely automated in the next decade, but almost all jobs will be affected in some way. The whitepaper breaks down work into seven activities, analyses how much time is currently spent on each activity and predicts the technical feasibility of automating them in the next decade by adapting current technology.

The three activities most likely to be automated in the next decade are predictable physical work, data processing and data collection, while the least likely activities are managing others, applying expertise and stakeholder interactions. To provide an additional filter, AESC surveyed 400 executive search consultants and executive-level candidates to understand how much time is spent performing each activity and, therefore, project if there are certain executive roles that may be more susceptible to automation.

In all seven C-suite roles, we explored the time spent on the three least automatable activities (managing others, applying expertise and stakeholder interaction) totals over 75% - and scores over 80% in the case of CEOs, CMOs, CSOs and GCs. Excelling at these activities requires a combination of outstanding leadership traits – such as agility, emotional intelligence, decisiveness – and deep industry and functional knowledge built over decades of professional experience. These factors are so nuanced and differ so much from one person to another, which makes it much harder to automate.

When noting the small share of time spent on the four activities that are more likely to be automated, it is likely that C-suite roles won’t change dramatically in the next decade, in terms of the activities being performed themselves. However, the fact that the C-suite appears so impervious to automation suggests that the impact of automation will be felt on a larger scale further down the organization. 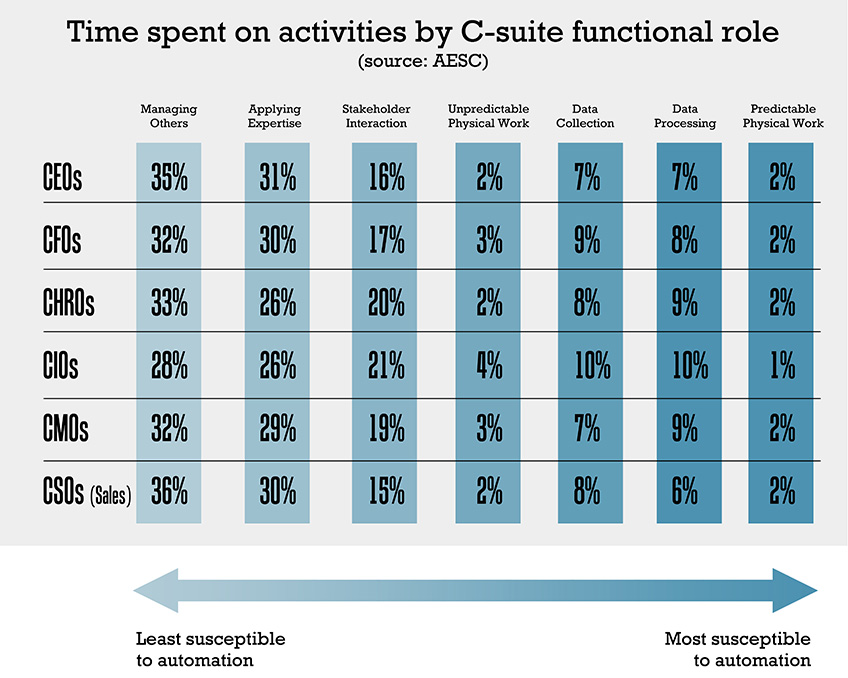 Richard Vincent (The Netherlands), Partner at Leaders Trust / AltoPartners, says: “Technology will lead to much fewer middle management roles and will raise conversations around what skillsets we will need for leaders. I believe that key competencies will be interpersonal skills, communication and an ability to understand and work with other cultures.”

So while the time spent completing activities in the C-suite may not change, the focus likely will. For instance, managing others ranked as the activity that C-suite executives spent the most time on, even more so than applying expertise. If the next decade poses the potential for large-scale automation of activities, that will pose new leadership and management challenges.

Gerd Leonhard, a leading futurist and author of Technology vs. Humanity, believes that business leaders need to be conscious of the ripple-effects of their decisions as they relate to automation and they need to start thinking about these issues now. “The question is no longer whether technology can do something for us,” he says. “The question is now about purpose. What do we want technology to do and how far do we want to go with it?”

If new technology becomes available tomorrow that can cut costs and improve efficiency, executives will be under pressure to adopt it. But what if it also leads to tens of thousands of redundancies? One of the caveats that McKinsey builds into its predictions is that the extent to which a process or industry can be automated partly depends on societal acceptance. In the whitepaper, they cite healthcare as the best example: “A robot may, in theory, be able to replace some of the functions of a nurse. But, for now, the prospect that this might actually happen in a highly visible way could prove unpalatable for many patients, who expect human contact.”

While social acceptance could be a contributing factor in decision making, Leonhard believes we need to build checks and balances for technology development now: “If we don’t regulate this power and have a social conduct to deal with its possibilities, it could end up very ugly.”

In essence, Leonhard is recommending that we don’t lose sight of what makes us human in the first place; traits such as intuition and emotional intelligence define us and give us the ability to be outstanding leaders. These traits will become even more valuable as we enter a new business climate where more can be done with less human resource.

How will automation affect executive search?

Executive search professionals will need to be attuned to these changes as they happen, to ensure that they are advising clients and recommending candidates based on the potential for significant technological change in the next decade. But will automation have an impact on the profession itself?

The results of our survey of AESC members paint a similar picture to the outline of the C-suite roles: 81% of time is spent on the three activities that are least likely to be automated. However, much more time is spent on data collection, which McKinsey gives a 64% rating in terms of technical feasibility of automation. 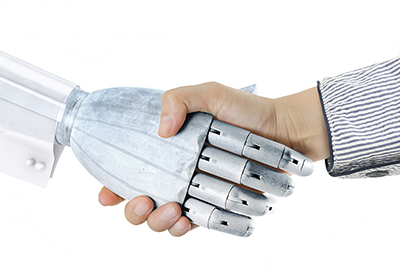 The responses to our survey of AESC members were exclusively from consultants and partners, so it would be interesting to see how much the time spent on data collection increases when looking at research – perhaps the function that faces the greatest disruption in the next decade. As Mikael Stelander (Finland), Regional Vice President, Europe, Middle East and Africa at Stanton Chase, explains, this presents an opportunity for the research function to become more elevated. “The first phase of innovation will be digitalized administrative and research services,” Stelander says. “Being able to quickly pull longlist data using our existing databases and algorithms will make us better and quicker. Then we can focus on elevating the research function to that of a knowledge center.”

Jeremiah Lee (USA), Leadership Advisory Consultant at Spencer Stuart, expands on this further. “Technology could certainly enhance research efforts across different function and practice areas. If we can aggregate that data, we could pick up some really interesting themes that may not seem so intuitive to a person analyzing the data.”

One of the interesting challenges for executive search and leadership consulting firms in the future will be ensuring that their knowledge grows as quickly as the client organizations change. Traditionally a consultant will have spent years in industry to build their knowledge, but if those industries change dramatically overnight, the consultant must ensure that they remain relevant. “As complexity increases, so does the complexity of the executive roles and the complexity of the executive search to fill those roles,” says Anton Derlyatka (Russia), Senior Partner at Ward Howell. “A key success factor is to understand your client’s business as well as they do. With the increasing pace of change, it adds pressure to adapt quickly. But there will always be a situation where a client needs someone who can grasp the complexity and context of the role they want to fill.”

Technology is enabling the advancement of long-standing executive search techniques to provide more scientific data about clients, candidates and cultures. Advances in psychometric testing, assessment centers, cultural assessments and other methods have significantly enhanced what we know about leadership. But even in these instances, the most significant factor by a long shot is the judgment of the human interpreting the data.

Alec Ross, author of The Industries of the Future, agrees. “As software eats more of what we do, deep domain expertise becomes ever more important. It’s a terrible time to be mediocre, because the insistence on excellence will grow higher. As the world becomes more saturated by technology, at the high end of the labor scale people are going to demand more human interaction and a vaulted experience.”

As the world becomes more saturated by technology, at the high end of the labor scale people are going to demand more human interaction & a vaulted experience.

This can be seen in the market that has emerged for high-end travel agents. Who would have thought several years ago when brick and mortar travel agents were closing down that there would be a thriving industry for holidays that cost $100,000 and more? But if you’re going to book a oncein- a-lifetime trip to somewhere exotic, you expect a better service than holiday booking websites are able to provide.

While automation, enabled by increased human capital analytics, may further hurt talent acquisition at the middle-manager level, there comes a certain point where the human touch is essential. As was the case with LinkedIn and the internet before that, there may be critics who suggest otherwise, but the profession has demonstrated agility and openness to embrace these new technologies when they have emerged. Ultimately it comes down to balance and adaptability, as Leonhard concludes: “If you ignore technology you definitely won’t be successful because you won’t have enough information to make informed decisions. But if you give yourself over entirely to technology, you will simply become a machine.”