What Would the Great Economists Do?

How Their Ideas Can Help Us Today — By Linda Yueh

In The Great Economists: How Their Ideas Can Help Us Today, Yueh looks at current economic questions through the lens of some of the most influential thinkers in history: Adam Smith, John Maynard Keynes, Milton Friedman, Karl Marx, Joseph Schumpeter and other greats. After first putting the economists and their theories into the historical context of their respective times, Yueh then applies their thinking to some of the pressing questions of our time. How might Joan Robinson explain sluggish wage growth, today? How would Alfred Marshall view growing income inequality? What can we learn from the global financial crisis through the eyes of Friedrich Hayak? And finally, what would the great economists make of the backlash against globalization?

Professor Linda Yueh holds senior academic positions at London Business School, Oxford University, and the London School of Economics. She is TV and radio broadcast journalist and has served as an anchor and correspondent for Bloomberg TV and BBC news.

Dr. Yueh has consulted some of the world’s most impactful organizations including The World Bank, the EU, the World Economic Forum and the Asia Development Bank. The Great Economists: How Their Ideas Can Help Us Today was selected as The Times’ Best Business Books of 2018 and as Newsweek’s Best Fiction and Non-Fiction of 2018. It was published in the US as What Would the Great Economists Do? How Twelve Brilliant Minds Would Solve Today’s Biggest Problems.

Excerpt from The Great Economists: How Their Ideas Can Help Us Today —from the chapter “Robert Solow: Do We Face a Slow-Growth Future" 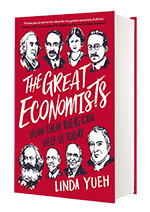 Economic growth across major economies is slower today than before the 2008 global financial crisis, but not just as a result of the crash. Economies such as the United States, the Euro Zone, Japan and the UK had been experiencing a marked slowdown in productivity growth since the mid 2000s.

Some economists are warning about permanently slower growth in advanced economies, in part because their aging populations will be less productive. Could these economies be facing what the former US Treasury secretary and Harvard professor Lawrence Summers describes as ‘secular stagnation’? If so, then those countries face a worrying economic future. Fewer workers require fewer office buildings and less equipment, which also depresses investment and therefore the economic outlook. That point seems to be approaching: US labour force growth slowed to just 0.2 per cent in 2015, down from 2.1 per cent from the 1960s to 1980s; for the UK, the annual average rate of labour force growth is somewhat better, but it is still down to around 0.6 per cent.

An overwhelming concern is that the situation in Japan in the early 1990s will be repeated in the West. When the real estate bubble burst, the ensuing economic collapse revealed an underlying stagnation that had been masked by the crisis. Japan’s problems have been compounded by a population that has been shrinking since 2010. A smaller workforce makes it harder to improve productivity and raise output growth. Slow productivity growth in particular is an issue for Britain, which is facing its weakest recovery in modern memory. This is a lesson to heed, since the national output has recovered to pre-crisis levels, but productivity continues to lag behind.

So, the new normal growth rate may be lower than before. Or, worse, be stagnant. How worried should we be about a slowgrowth economic future?

The author of the workhorse of economic growth models, Robert Solow, might provide some answers. The Solow model shows that economic growth arises when workers and capital are added to the economy, but that it is sustained only when there is also technological progress. Better technology improves labour productivity, which increases capital accumulation by slowing down the diminishing returns to capital. Diminishing returns happen when a worker is given more than, say, two computers; that worker won’t produce as much with the third computer as compared with the first two unless there is better software that allows computing to be done without the person using it all the time. Technological progress allows the existing inputs of workers and capital to be used more efficiently. An increase in output due to technology is referred to as total factor productivity (TFP) in economic growth models. Physical capital as well as human capital—the skills and education of workers—are central to this model. It’s especially pressing for rich countries, where the working-age population is ageing or even shrinking and having better skilled workers is even more important. How to raise productivity lies at the heart of whether or not we’re doomed to a stagnant future.

What would Robert Solow, the Great Economist whose pioneering work has helped us to understand what generates economic growth, make of the prospect of low productivity and a slow-growth future for major economies?