Preparing for the Day after Tomorrow

Peter Hinssen is the author of The Day after Tomorrow, a new book that illustrates how companies can prepare themselves for radical change.

After 25 years in the start-up world, Hinssen found himself spending nearly all of his time with executives responsible for large divisions of even larger organizations. Hinssen says he was “flabbergasted” at the differences between those two worlds, and fascinated by their completely different ways of thinking about opportunities and agility.

Don’t look at tomorrow with what you know today. Try to look at the second horizon—the day after tomorrow.

"In the last couple of years the pace of technology has picked up, and we feel this as consumers, we feel this as citizens, we feel this as parents,” Hinssen explains. “And we see traditional organizations who have size and scale increasingly worried that they are not capable of going fast enough, of not being agile enough, and not being able to respond to the seeming avalanche of new technologies.”

The Day After Tomorrow explores the structures, mindsets, behavioral patterns and cultures of companies that are bracing themselves for and organizing themselves to be better at dealing with change.

Hinssen’s favorite analogy is the plantation and the rainforest.

Traditional organizations are the plantations: They are run very effectively. They’re very good at their particular crop, but they’re probably never going to be clever about doing anything else.

The start up world is the rainforest. It’s a scary place, it’s a dangerous place, and you can die! The mortality rate of a start up is very high.

Hinssen says “One of the interesting things that you do (in the executive search and advisory professions) is you guide that process – you understand the psyche of the individual, and you understand company culture. … you have a unique capability being able to match cultures.” And culture, he predicts, is going to become even more important.

“A maelstrom of technologies is accelerating the pace of society and business,” Hinssen says, to which organizations will need to adapt to survive. In that environment, he says, “structures are not going to save you – I think it’s culture that is really capable of helping companies reinvent themselves.” 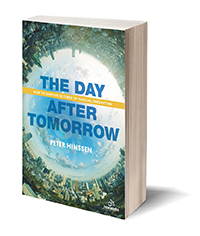 To Hinssen, it is essential that organizations “put everything in place so that the people who are going to transform your company are given every single opportunity to succeed.” Who are those people? Hinssen explains.

“Ironically,” he says, “the future of the company probably resides in the 0.1% being able to reinvent the company, organization or business model.”

To Hinssen, the true irony is that the 1% people are spending most of their energies fighting the 99% population. He says “I think it is essential that organizations realize that, shelter these ‘day after tomorrow’ people, and make sure they have all the potential to reinvent the organization.”

“In that sense, this is really a book of hope.”