Accelerating Performance is an evidence-based roadmap to identify how to break organizational behavior traps and create transformative, sustainable momentum that outpaces and outperforms competitors. Colin Price and Sharon Toye, partners at Heidrick & Struggles and co-authors of the book, provide an actionable playbook for CEOs and senior executives on how to boost the metabolic rate of their teams and organizations based on empirical research and decades of experience advising companies globally.

Toye explains that, "Clear thinking can be muffled by the layering of one opinion after another, and data allow us to cut through that."

With striking clarity, Price and Toye present factors in organizational, team, and leadership behaviors, and offer a direct path for anyone willing to take on the hard work of transformation.

Below is an adaption of the book. Read more in our publication Executive Talent.

Think of leadership as fire, not water. It’s not a limited resource such as water but a spreading process such as fire. Not all leadership needs to come from the top.

Many articles and books talk about how organizations are prone to getting stuck in the middle of the hierarchy. Midlevel leaders are variously named “permafrost,” “the marzipan or clay layer,” or “the missing middle.” These are all ways to describe the difficulty of engaging middle managers and creating leadership throughout the organization. How important is this middle layer? For four years, a team of researchers at Stanford studied the performance of more than 20,000 frontline workers, such as airline check-in staff, call center workers, and supermarket checkout personnel. An analysis of six million data points showed that productivity was increased by 12 percent if someone who had a poor manager was given a strong one.

The recent development of organizational ecosystems brings another twist because of all the contractors and freelancers who have to be led.Apple, for example, has 45,000 employees worldwide but another 180,000 people outside the company who earn their living developing apps for Apple’s iOS. A whole different kind of leadership is required now.

According to neuroscience, the degree to which a leader engages others is the degree to which the leader inspires trust and excitement. It is feelings, not thoughts, that dominate how we make decisions. It is this energy from feelings that can inspire accelerated performance. 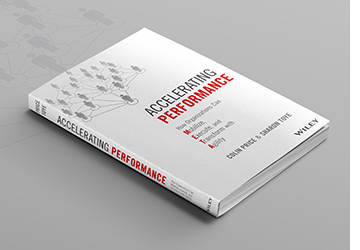 We see lots of organizations striving to engage their people by trying to tap into their emotions through value statements, even though most people’s organizational life is not the espoused values or mission and vision statements. The objectives, tasks, KPIs, and outputs required of them are the things we measure and, therefore, the things we pay attention to. But these things don’t motivate people to apply their discretionary effort. Only things that shape and elicit people’s feelings can do that, and only leaders are capable of creating those things. The creation of a motivational culture is not an outcome of accident or coincidence. How you make decisions, how you have conversations, how you direct the actions of those you lead, and how you behave generate a chain reaction in those you lead.

Look no further than Howard Schultz of Starbucks to see the value of leadership. The company thrived during his first 15 years at the helm, lost its way when he stepped away from the CEO position for 8 years, and has gone gangbusters again since he returned in early 2008, so much so that it made our list of super accelerators. Scott Pitasky, executive vice president and chief partner resources officer, told us that there is an emotional component to the business: “It’s about the relationships that we have with our partners [what Starbucks calls its employees], and their relationship with customers. That creates a unique environment that is the core of our business. You can’t have a great relationship with your customers if you don’t have a great relationship with your partners. It won’t work. It’s a strategy that binds us, and an emotional commitment. A couple years ago we had an investor day here in Seattle with a group of investment bankers, and Howard started out saying, ‘I want to talk about love.’ That felt a little awkward as a way to begin a discussion about how we are doing as a company, but that’s a pretty good way to describe what we do. And I haven’t seen that in other places I’ve worked.”

Business leaders need to learn, as politicians have, that even if you govern in prose, you must still campaign in poetry.