The Financial Times (paywall) recently reported that PwC, EY, KPMG and Deloitte (the “Big Four” accounting firms) fired dozens of their partners in the last three years citing “inappropriate behavior,” including bullying and sexual harassment.  This reflects a broader cultural shift in the way organizations respond to such issues.  In the past, victims – particularly those in the entertainment and media industries – were pressured to sign non-disclosure agreements to protect their employers.  Public disclosure of these Big Four firings marks a concerted effort in the industry to get out in front of sexual harassment issues, rather than let possible revelations hurt the reputation of the company in question.

David Sproul, CEO of Deloitte’s U.K. operations, was quoted in the article as saying, “the easy option would be to play down the bad behavior or deal with it discreetly.  But I believe taking direct and visible action — including removing colleagues or partners should their behavior go against what we expect at Deloitte — is critical.”  Multinational firms are increasingly taking this proactive approach to enforcing their values, but there is still much to be done.  Sproul continues, “People need to feel empowered to do the right thing.”

Insiders in the accounting industry are welcoming this new level of scrutiny from the Big Four, in part because workplace misconduct can tarnish not just the reputations of individuals, but of organizations as a whole.  These public disclosures, and the firings themselves, help bring transparency to the workplace and signal a commitment to improving corporate culture more broadly.  As Jim Mintz said in an interview with Middle Market Growth (MMG) magazine last summer, “If Bob is having an affair with his assistant, that’s no longer just a personal problem – it’s a liability for the company.” 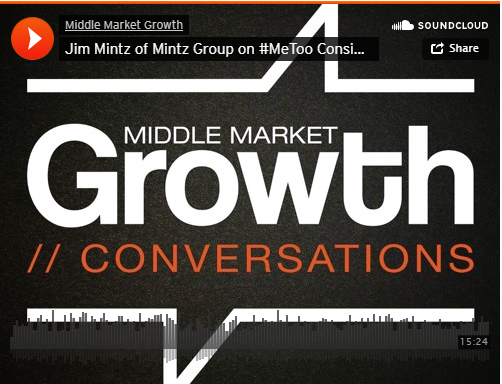 Mintz is founder and CEO of the Mintz Group, a global investigations firm that has been “flooded” with assignments from clients seeking help in navigating #MeToo territory.  The Mintz Group routinely conducts research into workplace misconduct when it performs background checks for prospective employers before hires, and for investors before transactions.  In addition, Mintz has looked into these allegations in the course of its fact-gathering for litigators. The MMG interview focuses on methods investigators are using to uncover the facts behind sexual misconduct allegations, and on what companies can get wrong in approaching the issue.

In uncovering the facts, online research is critical, but only a starting point.  Some of the basic steps include:

But it’s a mistake to stop with public records.  The MMG interview highlights the importance of talking to people during #MeToo investigations.  As Mintz put it, after paying tribute to women who have blown the whistle, “The challenge is that there are many whistles that have not yet been blown – stories buried in the heads of victims and witnesses.  One challenge for background checkers like us is keeping an eye out for red flags, and then knocking on the right doors to hear those buried stories.”

The accounting industry is one of several that has taken steps to improve workplace culture, increase transparency and bring accountability where it is needed most.  Partnering with a firm like the Mintz Group can help others follow that lead.

This is a guest post by AESC Partner The Mintz Group.

About The Mintz Group

The Mintz Group is the exclusive due diligence partner of the Association of Executive Search and Leadership Consultants. Founded in 1994, they have a team of more than 250 investigators, including former investigative reporters, federal investigators, prosecutors, anti-corruption investigators and former intelligence officers, with offices in 15 cities in North America, Latin America, Asia, Africa and Europe. Having vetted many thousands of executives for search firms and their clients over the years, they are recognized as a global thought leader on executive background checking.