How Will Automation Change Executive Roles of the Future?

Ray Kurzweil, Google’s Chief Futurist, believes that we will have computers with the processing power of the human brain by 2025 and the processing power of the entire human race by 2050. Having predicted the fall of the Soviet Union, the astronomical rise of the internet and the day when a computer could beat a chess champion (as happened in 1997 when IBM’s Deep Blue computer triumphed over Gary Kasparov), Dr. Kurzweil is not to be ignored.

We now live in a world where self-driving cars could soon be zipping around large cities, personal assistants could be automated through machine learning, drones can deliver items in minutes instead of days, and we trust algorithms to recommend the restaurants we eat in, the TV shows we watch, the books we read and the holidays we book.

So what do these changes mean for the future of work? Are we on the brink of widespread technology-led unemployment? Or are we approaching an unparalleled era of technology-enabled human productivity? 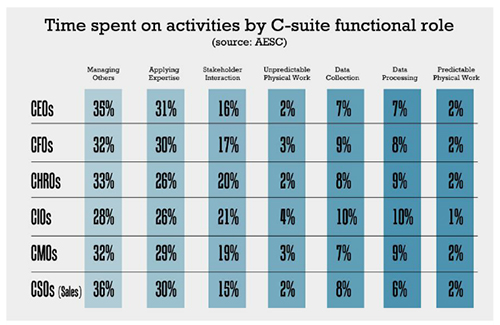 Where could machines replace us?

The McKinsey Global Institute recently explored these questions in its whitepaper ‘Where machines could replace humans – and where they can’t (yet)’. The central thesis is that very few, if any, entire occupations will be entirely automated in the next decade, but almost all jobs will be affected in some way. The whitepaper breaks down work into seven activities, analyses how much time is currently spent on each activity and predicts the technical feasibility of automating them in the next decade by adapting current technology.