What do Candidates’ Social Media Profiles Say about Them?

the importance of background checking on social media

Today’s executive search consultant is pulled by competing forces. On the one hand, candidates are increasingly sensitive about data privacy and (understandably) wary of intrusion. On the other, clients have a growing appetite for information about candidates and less tolerance for controversies involving them. Twenty years ago, if an executive embellished a degree, it might not have been noticed at all, much less gotten the executive fired. Today, these seemingly minor details can upend the fortunes of executives and the businesses they run.

In the old days, clients were more forgiving of minor indiscretions, and there was less of a chance for executives to publicly stumble, because their footprints were much smaller. A typical executive’s paper trail was limited to print media, maybe some legal filings at the local courthouse, a few property records at the Recorder’s Office and some annual reports at the SEC.

Nearly all executives now leave behind digital footprints that cut across a number of social and professional media sites, some easy to find in a Google search and some buried deep. Even though old posts can be deleted, hardly anyone actually does it. These old missives are tied to an individual forever – an errant Tweet about a racy subject, a rant laced with expletives about the last-second Super Bowl loss, clicking a button that “Likes” a post that they didn’t even author. Yes, even those “Likes” can become a part of someone’s permanent record and may not be flattering in the eyes of a potential employer. The shelf life of social media posts can outlast an executive’s entire career. 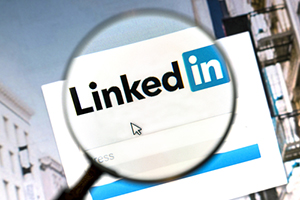 It isn’t surprising given all of this exposure that protections are falling into place that limit the use of a candidate’s social media activity in employment decisions. For example, several years ago, state lawmakers started introducing legislation in the U.S. that prohibits employers from asking for the passwords to a candidate’s social media accounts. This suggests a rational balance: that candidates are accountable for only publicly viewable social media content, and not what’s behind privacy settings, usernames and passwords. The envelopes in the mailbox at the end of your driveway are private, and the posts in your private Facebook inbox are private. In the EU, a court upheld that individuals can request that search engines delete information that is outdated or inaccurate, which has sparked a fascinating debate over the balance between data privacy, public interest and free speech.

Even with limited privacy parameters in place, there is still a vast amount of information about candidates online. According to Twitter’s statistics, 500 million tweets are sent every day, and that is only one social media site. As newer generations rise up the executive ranks, the number of social media posts that have to be vetted is likely to balloon. Keep in mind that combing through a candidate’s public social media activity is no easy task. Only some of the content can be key-word searched and the investigative web-scraping tools available are useful but imperfect and largely limited to English language, which, with a global talent pool, hardly covers the bases – especially when you consider that Facebook alone is available in more than 70 languages, and there are numerous popular social media sites that are not in the English language, like Xing, Viadeo, and Weibo. Finding the hidden red flags in all of this data requires effort and sophistication.

The challenge for search consultants is that clients often expect them to find this information and interpret it. We recently vetted an officer candidate who fit the role nicely but had used some minor profanity in a Tweet. The client found this language objectionable and decided to pass on the candidate. Some of us would find this level of scrutiny extreme, especially when the post in question is out of context. When we find something clearly adverse, like a racist remark or evidence of sexual harassment, this is more universally within bounds and worthy of serious investigation. But either way, interpreting the relative seriousness of social media “offenses” is entirely subjective.

This means that search consultants have to ask different kinds of questions of their clients at the beginning of a search. The client may have a social media policy that, among other things, prohibits posting sensitive corporate information, such as an employee’s personal opinion about the company’s financial results. But what is the client’s attitude towards bad language, sharing personal information, and discussing politics? Is the position in question more of an outward-facing marketing role, or an inward-facing compliance role? Is the client personally conservative?

At the same time, consultants should encourage candidates to leave a responsible digital trail, by deleting questionable posts, double checking the privacy settings for each of their accounts, and even searching on their own name, personal email address and handle in Google to see what comes up. There are “search engine optimization” tools that can help neutralize negative Internet posts to some extent. The more careful the candidate is in cultivating a social media presence free of indiscretions, the less likely it will be for a future candidacy to be derailed.

It may seem daunting and unnecessary to review a candidate’s social media posts, whether internally or externally, and discuss them with clients, but this issue will only grow in significance as social media use increases and the demographic of the executive ranks changes. An ill-thought-out post from years ago has the potential to tarnish a candidate’s reputation, and search consultants have a unique opportunity to coach executives on this and reduce their clients’ risk of exposure to a social media scandal.

The Mintz Group sets the standard for background checking of executive and board candidates, from long list to finalist, globally. As an Official Partner of the AESC, The Mintz Group provides AESC member firms with preferred service and pricing.