Stand Out From the Digital Crowd

How can executives and researchers ensure that they’re using social media effectively, efficiently and lawfully?

Executive search firms are looking for specific expertise and leadership traits, not a jack-of-all-trades. So before diving into any one platform or site, executives should spend some time on a personal branding strategy. This will differ based on the region, industry and function that they work in, and those differences will help them establish what they intend to achieve from their social media activity.

If an executive search firm is looking for a marketing head for a consumer media company, they may look to Twitter and Facebook to get a sense of how much of a following an individual has. Whereas a search for an operations head at an oil and gas company may require more traditional research techniques.

Ultimately, you want to know that you are investing time in a place that could yield results, so look to see if executive search consultants and other industry thought leaders have profiles and are active on the site you are considering.

“I look at social media as both inbound and outbound marketing,” says Kathy Simmons (USA), Executive Director of BlueSteps Executive Career Services. “Particularly with LinkedIn, it’s not only a way to be found, but also a way to demonstrate social proof.”

I look at social media as both inbound and outbound marketing. Particularly with LinkedIn, it’s not only a way to be found, but also a way to demonstrate social proof.

Different platforms offer different opportunities to validate your expertise and your position as an expert – LinkedIn has recommendations and endorsements, Facebook has likes and shares, Twitter has retweets and likes – so it is important to build a network of engaged connections once you begin using a site. Look for trends and topics that you can comment on that will yield engagement from other users – all the while thinking about your personal brand.

“Social media checks can be useful to show a candidate’s temperament and to judge if they will fit with what the client wants,” says Peter Lagomarsino (USA), Partner at The Mintz Group. “People can reveal a lot online and it is useful to check that the candidate’s social media history matches what they have disclosed to you privately.”

Indeed, the use of social media for both candidate identification and background checking has grown in popularity amongst research teams – although perhaps not as much as might be assumed. When talking to a selection of executive search professionals on this topic, they estimated that their researchers spent on average 20-30% of their time on social media. The rest of the time is spent on traditional research techniques (sourcing calls, personal networks, internal databases), advanced internet searches (Boolean and x-ray searches, reviewing industry event speakers, reading thought leadership) and in-person interaction.

Noting that social media is one of many tools used by executive search firms, there is a balancing act to strike between being visible and spending too much time online, as Fatih Pekbas, Partner at Stanton Chase (Germany), explains. “If, from time to time, someone posts a relevant article that they have written, that can be very useful and is something we appreciate. But if they’re regularly posting articles from other sources, it can be detrimental. Some people post five or six times per day and you begin to wonder why they have so much time on their hands.” 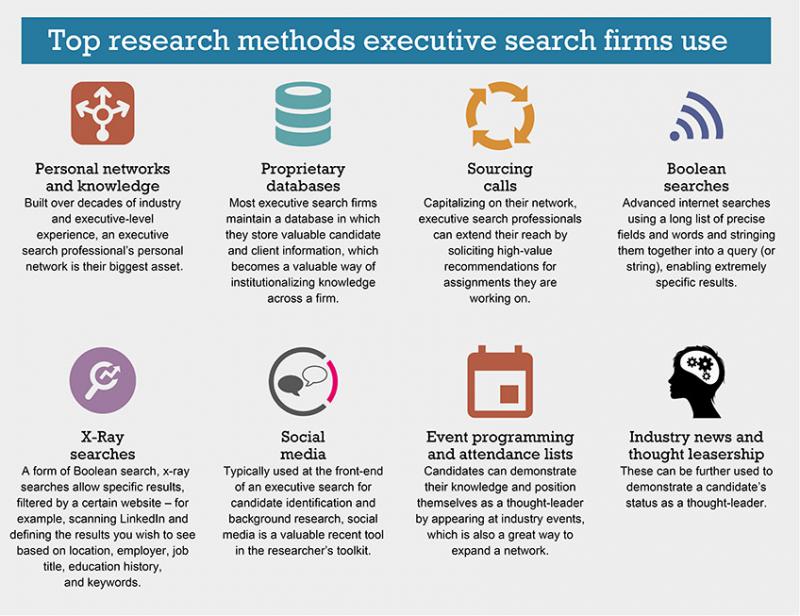 Whatever platform or platforms candidates decide to use for professional networking, they must also be acutely aware that anything posted by them or about them publicly online could be found during the research and background checking process. This includes posts, pictures and videos that other people have tagged you in. Background checking also doesn’t have a time limit, and candidates risk being caught out by posts and pictures from years ago unless they go back and do some social media housekeeping.

A recent example from the sports world shows the impact that old social media posts can have: earlier this year Andre Grey was considered to be an exciting young soccer player in England. But when a journalist discovered a series of homophobic tweets from 2012, Gray’s career was in tatters. Despite his apologies and insistence that he no longer holds those views, he was suspended from playing soccer and handed a large fine.

It goes to show how easy it is for a skilled researcher to discover past posts that may not reflect a candidate in their best light. There will likely come a time, when more candidates from generation X and Y enter the executive suite, that there may be less attention paid to historic social media posts, but in the meantime, executive-level candidates should know what is publicly accessible about them online. “These things can come back to haunt you years later,” says Heather Fookes, Director of Research at Davies Park (Canada). “Candidates can be excluded without even knowing it.”

Fookes goes on to explain that this is especially pertinent as it relates to pictures, and recommends that we all think carefully before posting images online and allowing images of us to be posted online. “If somebody says that they went hunting over the weekend, it may not be an issue,” she says. “But if they upload a picture of themselves standing proudly next to a deer that they have shot, it has a very different impact.”

In one example that was retold, a candidate who had made it to the final three for a CEO position was ultimately excluded due to a picture they had posted publicly on their Facebook page. The picture in question was of the candidate and his wife at the beach on vacation in their bathing suits. The conservative board ultimately felt that they couldn’t trust the judgment of someone who would publicly post a picture of themselves wearing what they deemed to be a revealing outfit. This demonstrates how subjective the assessment of social media posts can be and why it is better to proceed with caution when posting.

The right to respond

At the executive level, there aren’t many instances where an individual’s social media posts will rule them out entirely – aggressiveness, prejudiced and offensive statements, leaks of sensitive business information, consistent bad language, or regular drink or drugrelated posts can end an individual’s candidacy immediately. But most of the time the posts are more marginal than the process. this. It is then the responsibility of the executive search firm to discuss them with the candidate.

“If we see something concerning or a discrepancy between what we’ve been told and what we see online, it’s our job as executive search professionals to find out what is going on,” says Daniel Young (USA), Senior Associate at Witt/Kieffer. Having built trusting relationships with candidates, and offering the objectivity of a third party, executive search professionals are best-placed to discuss these potentially thorny issues.

BlueSteps Executive Career Services’ Simmons relays a recent example that she encountered that shows the importance of having a frank conversation with candidates about any concerning posts. “There was a picture of an individual that looked like they were taking cocaine,” she says. “It showed up in a basic Google Image search. When they were asked about it, the candidate explained that it was part of a reenactment for an antidrug campaign that they were active in.”

Candidates cannot be ruled out of contention for a role based on anything discovered online that is currently included in anti-discrimination laws in a specific jurisdiction. But beyond this there is little or no legal protection for individuals (although certain jurisdictions around the world, such as Europe, Hong Kong, Canada and Australia, are moving to guard their rights of their citizens through data protection regulations).

In such an unregulated environment, it becomes extremely important for firms to hold themselves to a high set of standards. The Mintz Group’s Lagomarsino outlines his approach to background checking on social media: “Universal principles that should be honored include: informing the employee or candidate that they will be checked; only searching public information; never asking for passwords or access to individuals’ accounts; maintaining a high standard of accuracy; allowing the candidate to respond to anything adverse; and removing social media information from our database as soon as it’s practical to do so.”

Ultimately, social media can be a powerful tool for executives to demonstrate their expertise and identify executive search consultants that they would like to connect with. But they should also be aware of the risks associated and regularly make sure that there isn’t something that they aren’t aware of keeping them from making their next career move.

For executive search firms, social media remains a useful tool to identify and learn more about executives. But it remains just one of many tools, and one that is only really useful at the front-end of an assignment. At the executive level, it does not serve as a proxy for personal relationships – a state of play that won’t change any time soon.

Michelle Cornish, Head of Research at Bushell & Cornish (Australia)
FOCUS ON YOUR ACHIEVEMENTS
We want to hear success stories. Talking about what you’ve achieved and how you achieved it, rather than rehashing your job description.

Heather Fookes, Director of Research at Davies Park
BE CONSISTENT
Before starting something, really think about whether you will have the time to keep it going. In some ways it looks worse if people have inactive Twitter accounts and blogs.

Fatih Pekbas, Partner at Stanton Chase
BE SPECIFIC
If you want to get the attention of executive search firms you should focus on your specialty. Don’t write a long list of areas that you can work in because it isn’t helpful.

Kate Bullis, Co-Founder and Managing Director at SEBA International
HAVE A GREAT NETWORK
If I’ve got mutual connections with you and can see that they’re great people, that’s the difference between me walking to the phone and running to the phone.

Daniel Young, Senior Associate at Witt/Kieffer
BE AWARE OF YOUR PRIVACY
Keep your privacy settings up-to-date for any outlet or medium that you don’t use professionally.

Jay Andre, Senior Director, Research at Kincannon Reed
GIVE EVIDENCE OF ACHIEVEMENTS
It’s very useful when people include links to speeches and presentations that they have given. They’re providing proof of their achievements and in some instances that truncates time the posts are more marginal than the process.

Kathy Simmons, Executive Director at BlueSteps Executive Career Services
UNDERSTAND HOW RESEARCH WORKS
It’s very useful to know how the search algorithms work. Then you can make sure that you have a good profile and a good tagline and that you’re using the right keywords to stand out.

Karen Russo, President at IIPE International Executive Research (Mexico)
SHOW YOUR PERSONALITY Our clients don’t want a company full of drones. I like it when I see candidates who are family-oriented and fairminded. I look for posts that are appropriate and also reflect genuine spirit, kindness, drive and passion.