A Conversation with John Amaechi

John Amaechi, OBE is founder of Amaechi Performance Systems, an organizational psychologist, author, Board Director, and thought leader. AESC spoke with him about the relationship between diversity and inclusion and organizational competitiveness.

Amaechi is very competitive. “I’m just really interested in winning,” he says. “And diversity and inclusion is one of the elements of that success.”

How we look at and define “diverse” is often incomplete, and Amaechi argues that we need to be sure that we are thinking of race and gender inclusively. “It’s amazing when you talk about race, people often imagine that that’s about Black men. When you talk about gender, people often imagine that that’s about white women, and specifically white professional women.” Amaechi adds, “We sometimes act as is if women who don’t have jobs don’t count. That’s not what I think, but it is how we behave.”

For Amaechi, absolutely every form of diversity needs to be part of the conversation. “Disability is one of those areas of inclusion that is neither sexy enough nor interesting enough for people to want to have a discussion about. It’s also just dangerous enough so that people with disabilities often choose not to disclose that. So it’s definitely part of the picture.” Amaechi is quick to point out that people are never just one demographic. “It’s really unlikely that another part of the identity spectrum won’t cross over.”

As a retired NBA player, Amaechi brings his competitiveness to his corporate clients. “I’m trying to make sure that people have all the tools possible to win as effectively and efficiently as possible. And inclusion is just one of those tools.” Amaechi explains, “Lots of people love the idea of marginal gains. The idea that there are these small elements that will provide essential performance enhancement either to their own performance or the performance of their unit or the performance of their organization. And yet inclusion is missed off that list of ways that we can enhance our performance.”

What marginal gains can be achieved by an inclusive workplace? Amaechi explains, “People operate better when they’re not frightened. People operate better when they feel like they belong. These are far from rocket science-level insights, but many people just seem to disregard them and think the strongest will survive, the quality will float to the top or other such ridiculous sophistry.”

Amaechi posits, “How can you make it so that people really want to get as much done as possible in the shortest time possible as efficiently and high quality as possible? We know that engagement is one of those metrics. How do you get people to come to an organization and stay? Engagement is one of those metrics. Even when you look at the practical side of things: safety, whether it be in the office safety in professional services environments or whether it be safety on dig sites or engineering firms, safety is related to engagement. It’s a win, win, win, win, win. Every time,” he says. “This is not a soft metric.”

According to Gallup, “Organizations that are the best in engaging their employees achieve earnings-per-share growth that is more than four times that of their competitors. Compared with business units in the bottom quartile, those in the top quartile of engagement realize substantially better customer engagement, higher productivity, better retention, fewer accidents, and 21% higher profitability. Engaged workers also report better health outcomes.”

Amaechi identifies a direct relationship between engagement and leadership. “The difference between engaged, high performing teams or not is the quality of their manager, their ability to make people feel like they are a part, they belong, and they are connected authentically. And so that’s what we’re trying to achieve. Almost every client is looking for a return on investment out of this, not just ‘doing the right thing.’”

The COVID pandemic, social and political upheaval, upended supply chains and accelerating digital disruption in 2020 have left many organizations rethinking what they need in their leaders. Amaechi says, “Before craziness ensued, their leaders were decent resource managers. They were decent at giving one appraisal a year, but they weren’t motivational. They weren’t good at dealing with different types of people, whether they be international or people who worked on a flexible or agile schedule. Now we’re in a scenario where workers have been humanized. Workplaces have had to realize that their people are human beings with fear, anxiety, worry, and now they realize that whatever gulf there was between the need for brilliant leadership and the quality of it has now doubled, and inclusion is a part of that picture.”

Is the solution an off-the-shelf D&I training deck? Amaechi answers with a resounding “no.”

Generic approaches to complex issues often “lack any kind of evidentiary basis and any kind of academic rigor.” He adds, “Now can training work, absolutely, if it’s got a sound pedagogical, academic basis. Maybe we have to consider multiple modalities: some real-time training, whether that be virtual or not, some self-driven learning, some small group activities, some individual coaching.”

In addition, what works is mandatory training. “It’s more resented, but it’s more effective. The reason that you’ll see metrics where people say that voluntary training works better is simply because the people who do voluntary training are already more minded towards it. You’re working with a cohort that’s both more motivated and usually has better skills to start off with. But actually, you need to reach the people who don’t want to show up.”

He adds, “The training has to be linked to the strategy of the organization.”

If diversity and inclusion can be taught, is it also possible to identify inclusive leaders? Amaechi points to several qualities that can signal if leaders are likely to be inclusive.

Self-confidence versus bravado: “Inclusive leaders are self-confident, but at the same time realize that they have to have a confidence that is exhibited in a way that doesn’t turn people away or make them think they are absolutely invulnerable.”

In addition, traits like creativity and flexibility, “especially the kind of mental flexibility to handle difficult situations with some measure of aplomb,” are among the traits of inclusive leaders, Amaechi says. 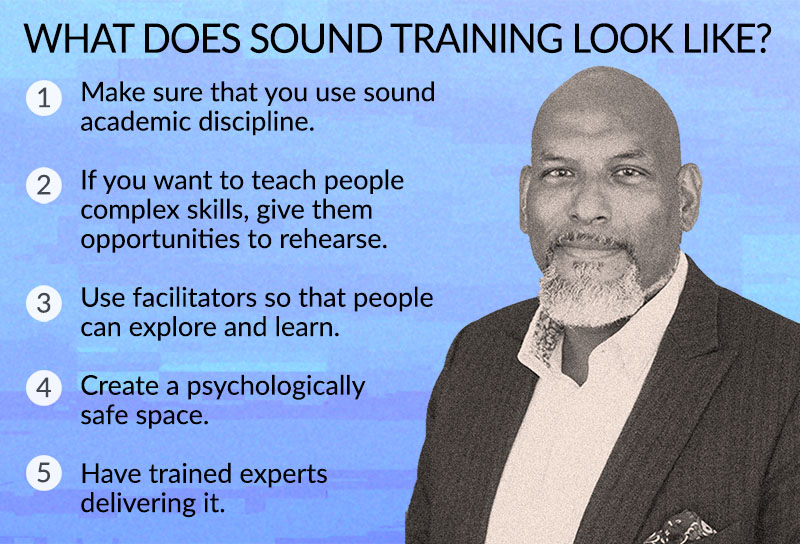 A Word about Inclusive Culture

Amaechi says, “Culture is defined in any given organization by the worst behavior tolerated.”

To illustrate, Amaechi says, “Respect is a very common value. Let’s assume we all know what respect means and that we think it’s a good thing. It’s easy to know whether an action that’s happened in a meeting is disrespectful. If you’ve just shared an idea, and I take that idea and I run with it, I tell a colleague in the meeting about that idea and say, ‘I had this great idea’ that was mentioned 10 minutes ago by you, and the colleague doesn’t say anything about that, that tells us the standard. That tells us that the neck of any colleague is suitable to be kneeled on verbally, intellectually. That’s the standard. Somebody has to say, ‘hold on a second…’ When we talk about the skills required to intervene, can we just understand how basic they are?”

Amaechi adds, “That’s what you do if you’re an ally.”

Coming Out On Top

COVID-19 forced leaders to pivot and organizations to adapt, and the disruption isn’t over. Even before the pandemic, digital transformation and the pace of change required a fresh look at leadership. Amaechi notes that one of the jobs of search and leadership consulting is to help clients think about talent differently. “We’re in a day and age where different types of leaders are required, where different insights can help organizations be prescient of future challenges. And this is part of the job of AESC members, to help people realize that what makes you comfortable is not what will make you win.”

There is a saying in athletic training, “No pain, no gain.” Doing things differently can be uncomfortable, but the companies that take on that challenge may gain an advantage.

“This is the eternal balance,” Amaechi says. “People talk about wanting to win, but really what they mean is they want to not lose whilst being as comfortable as possible. And that’s not the same thing.” He adds, “How we grow, how we adapt, how we survive has always been based on our ability to progressively challenge ourselves, overcome it, take a breath, and then do it again.”

We are still in the midst of challenging times, and Amaechi cautions, “Organizations that are poorly led by homogenous groups of people, whether they be homogenous demographically, or just homogenous thinkers, will fail. And as a society, we can’t afford that. So, hiring diverse people, making sure that leaders with diverse skills find that opportunity and flourish is for the benefit of us all.”