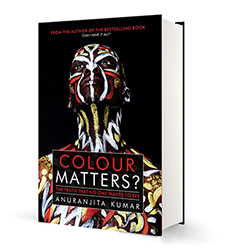 Listed among the “Most Powerful Women Leaders” by FORTUNE India and ranked on The Economic Times “Women Ahead List 2018,” Anuranjita Kumar is a recognized champion of diversity and inclusion. She spoke with AESC’s Executive Talent magazine about her book Colour Matters? and the state of diversity and inclusion in organizations and the world, today.

What inspired you to conduct this research and write Colour Matters?

To be honest with you, I think the genesis was my experience in different parts of the world and different parts of the country; the fact that I have two children, where one is very American and the other is very British; and having experienced the intersectionality of color and gender myself, having worked in some global organizations. I found colour an often neglected topic, which led to the almost normalization of victimization and racism at work.

People who are discomfited are too fearful to talk about it, lest they would be branded. As a result, everything that weighs on and pulls on people is just repeating.

Can you give us a trend-line of diversity and inclusion in organizations?

Unless we consciously strive and work towards changing attitudes, the well-known numbers around diversity in senior executive and board ranks are not going to change.

Unless we consciously strive and work towards changing attitudes, the well-known numbers around diversity in senior executive and board ranks are not going to change.

Whether it be executive leaders or HR, let’s first start with acknowledging that we have a problem. But constructively, we have an issue that can be resolved. I still believe we do not see this as a serious enough issue. We think we have good policy frameworks, etc. and we should meet those diversity targets. [Many diversity] efforts are around scrambling to comply with these strictures. But compliance is not about inclusion. Compliance can be achieved in multiple ways. But to bring about a grass root level change, there must first be strong messaging from the top, acknowledging we have a problem.

How is the absence of genuine D&I influencing top talent’s decision to join or stay with an organization?

If I have been hired because I'm a woman of colour, but if within the organization, I'm not included, whether it's a kind of behavior that I'm subjected to by my co-workers, or the manager, or it's my day to day interactions, it is not sustainable.

Until and unless the culture is inclusive, diverse talent is not sticky. If you look at the data coming from any of the consulting firms including the McKinsey report, or the research that I have done, the attrition tends to take two or three years into the organization.

Because what we tend to find from diverse talent such as minorities, it is okay for them to do marginal roles, it is okay to stay at junior level jobs, but the moment they start to push HR, there is a pushback from the majority, which is ‘don't over-reach.’ And I'm sharing that candidly, because I've heard so much about it from various people who left organizations where the culture just would not promote them, or created values that they were not able to stomach.

Until and unless the culture is inclusive, diverse talent is not sticky.

The decisions of minority persons, however talented they may be, will be driven by how successful they think they'll be in that organization, which to a large extent is driven by how the top leaders are setting the cultural tone for inclusion. And the probability of an open and inclusive culture when there is a diverse team, is more likely than in a homogenous team.

How do we help people react to difference with curiosity and not fear? And can employers help people get there?

I think we all grow up with what we learn from our nearest and dear ones. These are our families, friends, and neighborhoods. We grow up assuming those are gospel truth, and all our actions and reactions are governed by what we have learned as little children.

So I think in a way, when we are grownup and in organizations, in some ways we are quite hard-coded. And one way to, I won't say break it, but at least deal with it, is understanding the biases. And we've often talked about unconscious biases, bringing that to the forefront, being able to see them, makes us able to deal with them.

Here’s an example from the Indian diaspora. My grandmother would not like a Muslim to cook her food, because she believed that they were not clean. Now there is absolutely no logic to this. And as we grew up as a generation, that belief was passed down to my mother, who kind of said it, but was not fully driven by it. It was passed to me. I couldn't care, and my daughter just thinks it’s absurd.

Those spontaneous reactions are governed by unconscious biases. And to crack unconscious bias, the only way to do it, is making it conscious. Because once you're conscious, you realize the absurdity of it.

So in organizations, employers like us, we tend to talk about bias in formal settings. There are trainings, there are sessions, there are networks. There's plenty of effort which goes on today to challenge people in terms of their mindset, especially in a working relationship. I'm not sure we can change all mindsets, but we can create platforms for people to understand each other better.

I'm not sure we can change all mindsets, but we can create platforms for people to understand each other better.

Another example I narrated in the book is about black people in India. They said when they're on the street, people look at them with disdain or with fear, even though we are brown people here, we're not white. And they've been quite fearful of going out in some places in India.

I'm afraid there is no shortcut to this. But it's conversations like these when we can challenge prior ideas, that helps. I think for me even writing the book was a journey. A lot of people told me don't do it, because ‘Anu you will be branded as a troublemaker, or people will say you're playing the race card. Or they'll be fearful of even talking to you.’

So I think there are many others like me who will want to talk about it, and each little step makes a difference.

If even well-intentioned leaders and organizations are failing, what can AESC members and clients do?

Well I think two things. One is the AESC members work so closely with the organization, that redefining the paradigm of talent is important. Very often, if I was working with AESC members, and I was the client, I would ask, what does the specific group profile look like, and what is the persona attached to it? And then, what would diverse talent look like, and what are the values it brings to the table?

The second piece is the assessment process itself. We've often spoken about diverse panels. I have spoken to a couple of people who have said they are never getting a job because of the panel, who is completely from the majority group. So I think there is power in a diverse panel. Different kinds of people have a different way of expressing themselves. They have different value systems. If there is no one on the panel who can decode that in a reasonable way, it can become a bit of a handicap.

So one of the two things that would be very welcome for an organization, was defining what talent means, attributes, challenging any hidden biases. Second, the process of identification of placing that talent in the organization is completely color and gender agnostic.

What is the risk to organizations that fail to embrace diversity?

I think there's such a huge business case for diversity, that it will impact shareholder value. When I look at ambitious, global companies, I am looking at clients that are diverse. Not having a diverse workforce, it essentially doesn't make any business sense.

So the risk to the organization is financial returns if they do not embrace diversity. And I'm sure there's plenty of research on this. But to me it's a very straightforward business case, that if you don't do it, you can't go any further.

What is the risk to society?

In terms of what is the risk to the society, I think we're experiencing that. Failing to embrace diversity really tips the balance toward hard right activism, fragmentation and disintegration. My daughter is studying in the US right now. I do worry about it sometimes: is she accepted, is she safe? I actually like the place, but it just doesn't feel as joined up as it used to be when we were in the US a few years back. We're seeing that in India as well, and it is leading to a huge amount of insecurity.

And it's not just the US and India, it's happening all over. So at the end of the day we all want to live peacefully, we all want to lead a good life. And I think the whole game is about power, leading to insecurity, leading to disintegration, which is not necessarily a great life. It's certainly not a legacy I hope to leave behind for my children. Where they are insecure, they are unproductive, and they're living in a poorer world than we did.

Failing to embrace diversity undercuts the strength of humanity. That’s the risk to society.

Anuranjita Kumar’s latest book, Colour Matters? addresses the issue of race, ethnicity and color in society, from families and schools to workplaces and communities. Drawn on research, surveys and interviews, Kumar’s work shines a spotlight on the experience of living and working in the minority.